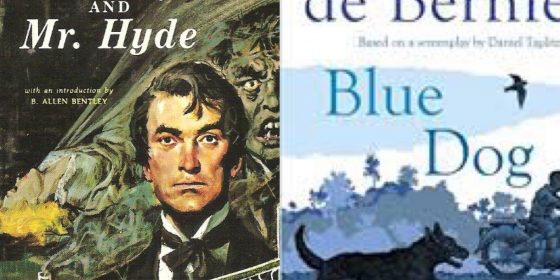 For use as a group discussion, as points to consider with your child/ren or on your own. This session focused primarily on context and the difference that makes to understanding a narrative.

The session ran on much longer than I intended, as there is just so much context to cover in The Strange Case of Dr Jekyll and Mr Hyde. Ideally, I would like to have done an extra session just on that book alone as there is so much you can do with it. It would be great to cover it as part of a bigger project on the Victorians, where you could really dwell on the context of the piece.

I assumed the children might struggle with the language, but they found it much more understandable than I had thought they would. I suspected there was a skipping over the trickier Victorian language, but they all claimed not… Having said that, they did need more prompting with the plot of the story than for Blue Dog…

The language in Blue Dog was helped by the glossary at the back of the book.

Although it is not in the notes, we actually ended up spending a relatively long time discussing whether Blue Dog depicted a realistic interpretation of a mental health illness, and whether Mick responded to it in a realistic way. It is also interesting to compare that to the mental health considerations, and the reactions of the other characters, in Dr Jekyll and Mr Hyde (split personality, addiction, denial, enabling etc.). Obviously, how you tackle these issues depend very much on the children in your group and their own life experiences, as these are sensitive areas of discussion.

On the whole the children enjoyed Blue Dog more, although about half felt that ‘nothing happened’ in the story.